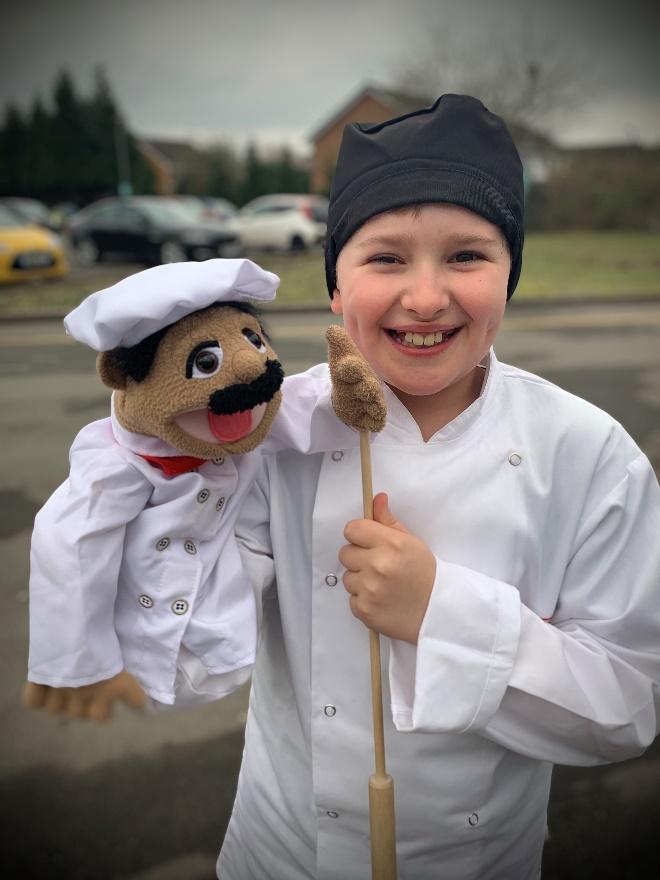 Joseph (aged 12 in 2022) has been a British Puppet and Model Theatre  Guild member since the age of 9. He has had an interest in puppets and animation from a very early age, at first playing and making short films with his brother, all with a focus on animating the characters they had made or chosen.

The Muppet Show, YouTube channels with puppetry, and documentaries about puppets and puppeteering all inspired him in his own use and collection of puppets. Visits to his community from theatre groups also opened up the world of puppetry and the scope of what can be done in live and video performances. (http://www.sealegspuppets.com/shows/the-uglyduckling/).

One of Josephs’ first puppets was a ‘chef’ – He took it along to a cookery competition to amuse himself and others in the breaks. Since then, chef has been cooking up all kinds of scenarios.

Gradually his interest moved to making puppets and crafting props, including making a full production of Jack and the Beanstalk using sock puppets he had designed and made. The script was written by himself and his brother Damian. It was a family effort, with Mum helping with the sewing and Dad building the theatre. The production was a birthday gift for his Granddad’s 79th while in lockdown.

Joseph was interested in the early Henson puppets in the Wilkins coffee (1957 – 1961) and Claussen’s bread (1962 – 1969) adverts, as he found them very funny. He tried to make a puppet in a similar design to this style, using scrap material at home.

He is still developing ideas around this and other puppet making. As a surprise, his Mum made him a set of ‘Red Riding Hood’ puppets for a secret Santa at Christmas – the Wolf can swallow Grandma whole, and a Velcro front on the Wolf allows her to return safely.

Most recently, he went to see a performance of the Pedlar’s Tales by The Fetch Theatre, and was inspired by their use of scale, and transformative set design allowing them to tell a set of stories in quick succession with simple changes, making the stories come alive.

Joseph is hoping to develop his puppeteering as much as possible, and continue with crafting and designing every day. Eventually, he would like to create short videos for YouTube so he can share his ideas for others to enjoy.

The Guild advocates the practice of Puppetry and Model Theatre. Tweeting about our events, members' news and puppetry across the UK!

Just a few photos of our guests at this years AGM. President Ronnie Le Drew, Jessica Parker-Hewitt and Nigel Plaskitt. Lots of new members there who really enjoyed the Puppet Guild AGM experience. Make sure you don't miss out next year.
http://www.britishpuppetguild.org.uk

Here is where we will celebrate some of our members interesting connections with our art and craft. Spotlight contributions will highlight gifted puppeteers, makers and toy theatre producers as they share a little of their life story with us. This section will be released shortly…. watch this space!